2C-N addition significantly increases activity at the serotonin receptor. This product is intended for forensic and research uses. 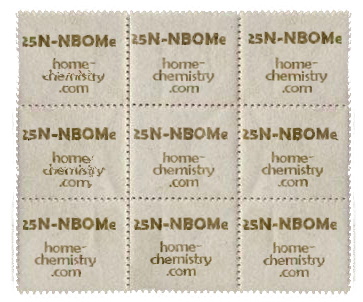 25N-NBOMe (2C-N-NBOMe) is a derivative of the substituted phenethylamine psychedelic 2C-N which was discovered in 2004 by Ralf Heim at the Free University of Berlin and subsequently investigated by a team at Purdue University led by David Nichols.

25N-NBOMe has a notably shorter duration than the rest of the 25x-NBOMe series, with a total duration of 6 hours and a peak duration of 2 hours. It is moderately active at a 1mg dosage, and  2mg provides a strong/heavy trip. This substance is considerably less potent when compared to the more popular NBOMes such as 25B-NBOMe, 25I-NBOMe, and 25C-NBOMe, all of which lead to strong trips at 1mg+ doses.

In terms of its chemistry, 25N-NBOMe is a substituted phenethylamine with methoxy groups attached to carbons R2 and R5 as well as a nitrophenyl group attached to carbon R4. It differs from 2C-N structurally through a substitution on the amine (NH2) with a 2-methoxybenzyl (BOMe) group, which in turn increases potency about a hundred fold.

In terms of its pharmacology, 25N-NBOMe has efficacy at the 5-HT2A receptor where it is assumed to act as a partial agonist. However, the role of these interactions and how they result in the psychedelic experience continues to remain elusive. There is insufficient scientific research to determine this compound’s true nature as the pharmacological properties of 25N-NBOMe have not been described in the literature but only in anecdotal reports. 25N-NBOMe has been sold as a street drug and has only been described in the literature in terms of identification by forensic analysis.

25N-NBOMe or 2C-N-NBOMe is a serotonergic N-benzyl derivative of the substituted phenethylamine psychedelic known as 2C-N. It is a substituted phenethylamine with methoxy groups CH3O- attached to carbons R2 and R5 as well as a nitro group NO2– attached to carbon R4. It differs from 2C-N structurally through a substitution on the amine (NH2) with a 2-methoxybenzyl (BOMe) group as shown in the image to the right. 25N-NBOMe shares this 2-methoxybenzyl substitution with other chemicals of the NBOMe family. This NBOMe addition contains a methoxy ether CH3O- bound to a benzene ring at R2.

The toxicity and long-term health effects of recreational 25N-NBOMe use have not been studied in any scientific context and the exact toxic dosage is unknown. This is because 25N-NBOMe is a research chemical with very little history of human usage. Anecdotal evidence from people within the psychonaut community who have tried 25N-NBOMe suggests that there are no negative health effects attributed to simply trying the drug by itself at low to moderate doses and using it very sparingly (but nothing can be completely guaranteed).

Users should be very careful and consider that ingesting 2mg+ of NBOMe series chemicals have proven fatal in some cases. Although there are no reported deaths caused by 25N-NBOMe at this time, it is a rare research chemical with very little history of human usage and is therefore potentially fatal at heavy dosages.

25N-NBOMe is not habit-forming and the desire to use it can actually decrease with use. It is most often self-regulating.

There is a extremely small margin between a normal dose or an overdose, because of the very high potency and seemingly unpredictable effects.  Specifically NBOMe compounds are subject to this small margin. The exact toxic dose is unclear since it seems to depend a lot on personal physiology, rather than predominantly dosage, but various anecdotal reports suggest dangerous side effects start to show up when exceeding 1000 μg and it possibly becoming lethal for the more sensitive people at roughly 2000 μg. Reports of other people surviving much higher doses, sometimes even without any major side effects has been documented as well. There is also the uncertainty of dosage on blotter paper since it is rather difficult to lay such an exact dosage. Insufflating, vaporizing or drinking tinctures of this substance is highly discouraged because of this and has been tied to many documented deaths.

NBOMes is the name for a series of drugs that have hallucinogenic effects. Reports indicate that there are a number of different versions of NBOMe available – all with differing effects. Likewise, psychedelics change the way a person perceives the world and can affect all the senses, altering a person’s thinking, sense of time and emotions.

If you take a large amount or have a strong batch, you might overdose. Because of that, you should call an ambulance straight away by dialling triple zero (000) if you have any of these symptoms (ambulance officers don’t need to involve the police):