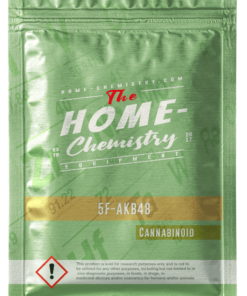 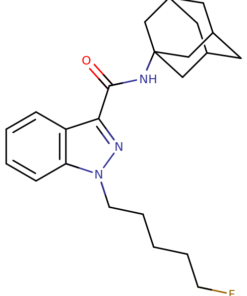 Although this substance has not been formally studied, from analysis of the structure, it is presumed that 5F-AKB48 has a similar binding profile to that of other cannabinoids and matches many of the in vivo properties of Δ9-THC. However, the role of these interactions and how they result in the cannabinoid high continues to remain elusive.

5F-AKB48 (also known as 5F-APINACA) is a synthetic cannabinoid substance of the indazolecarboxamide class. It acts as a potent agonist for the CB1 and CB2 cannabinoid receptors

5F-AKB48 has been investigated in the scientific literature. It was first identified in South Korea and is available for sale as a grey area research chemical through online vendors.

Subjective effects are reported to be somewhat similar to that of cannabis with a short duration and an emphasis on intense physical sensations.

Cannabinoids are commonly smoked or vaporized to achieve a quick onset of effects and rapid offset. 5F-AKB48 is orally active when dissolved in a lipid, which can increase the duration significantly. Like other cannabinoids, it is insoluble in water but dissolves in ethanol and lipids.

Unlike cannabis, the chronic abuse of synthetic cannabinoids has been associated with multiple serious injuries deaths and more dangerous side effects and toxicity in general. Therefore, it is strongly discouraged to take this substance for extended periods of time or in excessive doses.

The toxicity and long-term health effects of recreational 5F-AKB48 use do not seem to have been studied in any scientific context and the exact toxic dosage is unknown. This is because 5F-AKB48 has very little history of human usage. Anecdotal evidence from people who have tried 5F-AKB48 within the community suggest that there do not seem to be any negative health effects attributed to simply trying this drug at low to moderate doses by itself and using it sparingly (but nothing can be completely guaranteed). Informal experiments have shown that overdose will cause physical discomfort including heart palpitations, vertigo and sedation at much lower than dangerous doses, usually causing the user to suffer large amounts of anxiety or to fall asleep.

It has often been recommended that those with severe pre-existing mental conditions should not ingest these substances due to the way they strongly increase one’s current state of mind and emotions. Also, like THC, prolonged usage of synthetic cannabinoids including 5F-AKB48 may increase one’s disposition to mental illness and psychosis, particularly in vulnerable individuals with risk factors for psychotic illnesses (like a past or family history of schizophrenia).

As synthetic cannabinoids are active in the milligram range (with below 5mg being a common dose), it is important to use proper precautions when dosing to avoid a negative experience.

As with other synthetic cannibanoids, the chronic use of 5F-AKB48 can be considered moderately addictive with a high potential for abuse and is capable of causing psychological dependence among certain users. When addiction has developed, cravings and withdrawal effects may occur if a person suddenly stops their usage.

Tolerance to many of the effects of 5F-AKB48 develops with prolonged and repeated use. This results in users having to administer increasingly large doses to achieve the same effects. After that, it takes about 3 – 7 days for the tolerance to be reduced to half and 1 – 2 weeks to be back at baseline (in the absence of further consumption). 5F-AKB48 presents cross-tolerance with all cannabinoids, meaning that after the consumption of 5F-AKB48 all cannabinoids will have a reduced effect.